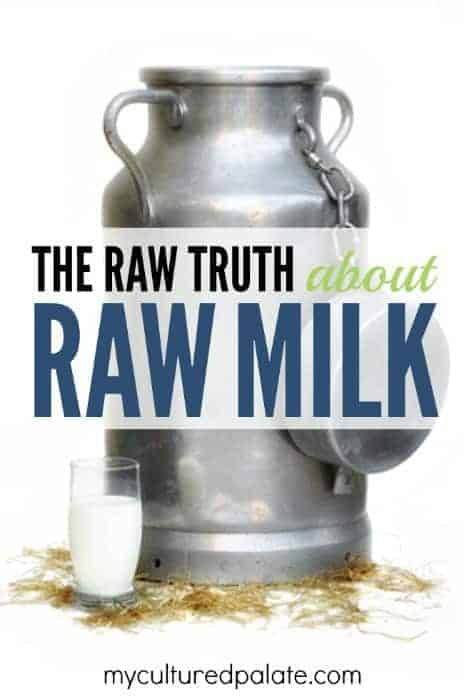 How many commercials have you seen lauding the praise of milk? Who doesn't recognize a celebrity's photo in an ad with a white mustache asking "Got Milk?" Unfortunately, none of this advertising is promoting raw milk, which actually has incredible health benefits!

IF these advertisements are referring to store-bought pasteurized milk, this advice is bunk. In fact, drinking pasteurized milk out of moderation can even be dangerous to your health!

What is the truth about milk - the RAW FAQS? Read on to hear more about the true facts of milk. It might not be what you're expecting! Goodness knows that we're not always fed the truth about this essential food.

1. The majority of milk consumed today is pasteurized.

But what does it mean for milk to be pasteurized?

Pasteurization is the process in which milk (or any food/liquid) is heated to a specific temperature (161F) for a specific length of time (15-20 seconds) and then immediately cooled.

Pasteurization is touted as a method of protecting us from infection. But the CDC notes that not a single person has died from drinking raw milk in over a decade.

So that's one myth busted: That raw milk is universally dangerous for everyone, and you shouldn't ever touch it.

2. Most American dairies use Holstein cows who never graze on fresh grass.

The milk produced by these cows is about three times as much per day as a traditional family milk cow - thanks to growth hormones and high protein grains.

Thankfully, the movement toward more grass-fed dairy and free-range eggs liberated many of these animals. But the transformation of the industry is far from complete.

An interesting note - modern Holstein cows have high levels of growth hormone (naturally occurring from the pituitary gland) even when NOT being given Bovine Growth Hormone! It's all in the natural selection. We're encouraging the growth and additional lifespan of cows who grow up bigger and stronger than ever. But this is a bad thing—any animal that changes in a rapid period of time may react adversely. It makes you think about what is unnaturally forcing them to increase in size. That's what all of this is: unnatural.

The most nutrient dense milk is obtained from cows feeding on green grass and especially the fast-growing grasses of the spring and fall. Milk from cows eating green grass, hay, root vegetables, plant foliage and traditional foods is the highest in vital nutrients, such as vitamins A, D, and K2.

3. We were duped into thinking low-fat and skim milk are good for us!

Perhaps, this was actually a marketing ploy of the modern dairy industry to sell poor quality, low-fat milk from high producing breeds! It's worth thinking about. Because we live in an age where everything has to be uniform and the same every time, we actually may be shorting ourselves on nutrition.

At the present time, retail raw milk sales are legal in 10 states.

On-farm sales are legal in 15 states, cow shares legal in 4 states, pet food sales legal in 4 states and no law on cow shares in 6 states. Raw milk sales are illegal in 11 states and the District of Columbia.
With the health benefit associated with fresh raw milk, there is no wonder that there is a growing rural revival returning to traditional eating. Real, nutritionally dense foods include locally grown produce and RAW MILK!
To find a local source for raw milk, go to Real Milk or WAPF. Find a local chapter and the chapter leader will be able to help you find a source in your area.
Because raw milk is still a contentious legal arena, I would suggest researching your rights before joining a group around raw milk. Don't put yourself at risk because you weren't aware of your rights!
And as always, please use your best judgment when it comes to food safety. Do the sniff test and research food safety standards when cooking. I am not a doctor, and this blog is not medical advice. Stay safe out there!