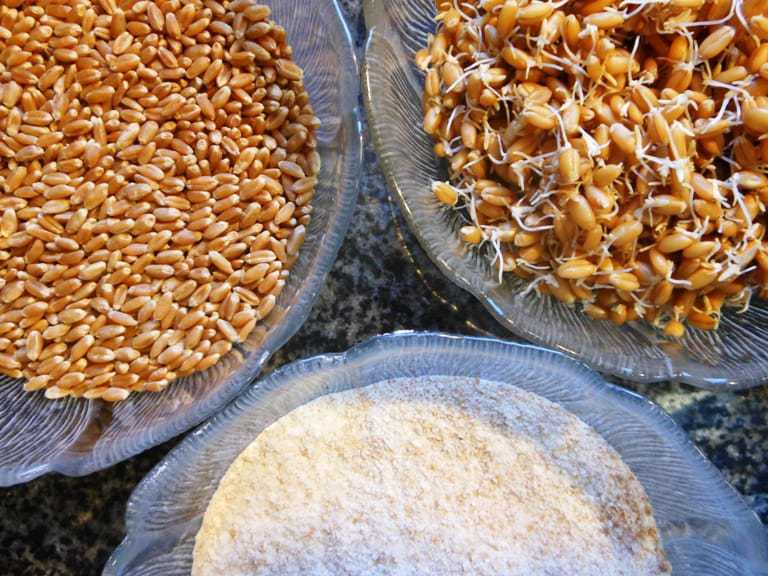 All grains look bad if you have been introduced to the GAPS diet.

That is not the case at all, if, you have a healthy gut. It is important to remember that GAPS is a temporary diet with the goal of encouraging "good" bacteria and healing the gut. Once intestinal healing has occurred, you can add grains to your diet. Properly prepared grains, that is!

Have you ever wondered why we change the way we do things? Usually changes occur for the sake of convenience, time saving and/or money making for larger companies trying to provide consistency of products.

The truth is, the old traditional ways actually had a purpose behind them and the new, more convenient modern methods may be harming our bodies!

Take, for example, grain preparation. As early as 1200 - 1500 BC the people in Guatemala soaked corn, a process called Nixtamalization. According to Wikipedia:

Nixtamalization typically refers to a process for the preparation of maize (corn), or other grain, in which the grain is soaked and cooked in an alkaline solution, usually limewater, and hulled. Maize subjected to the nixtamalization process has several benefits over unprocessed grain for food preparation: it is more easily ground; its nutritional value is increased; flavor and aroma are improved; and mycotoxins are reduced.

People soaked far more than corn throughout history. Soaking grain allows the grain to sprout. The vitamin and enzyme content of sprouted grains increases dramatically. Plus, the phytic acid and enzyme inhibitors neutralize.

Also known a germinating, people sprouted food for centuries. The Chinese sprouted beans for ocean voyages. Injera is a national dish in Ethiopia and Eritrea and according to Wikipedia is made by soaking teff flour in water and allowing it to ferment for several days before baking the large pancakes. Injera has a sourdough like taste which brings me to the soudough process. Did you know that before the 19th century and the identification of yeasts, all yeast-leavened breads were sourdough? According to Wikipedia:

The leavening process was not understood until the 19th century, when yeast was first identified. Since then, strains of Saccaromyces cerevisiae have been bred for their reliability and speed of leavening and sold as "baker's yeast". Baker's yeast was adopted for the simpicity and flexibility it introduced to bread making, obviating the lengthy cultivation of a sourdough starter.

Another point of interest is that due to modern farming techniques, grains no longer germinate as they once did in sheaves and stacks in the field.

Who cares, you might think.  After all, it is easier not to soak or sprout grain, beans, legumes and just stay with the options provided for us by our local grocery store.

But, there are a couple of important reasons that we all should care:

1. Sprouted grains have more nutritional value than their unsprouted counterparts

The vitamin and enzyme content of grains increases with sprouting.

The metabolic activity of resting grains and seeds increases as soon as they are hydrated during soaking. Improvements in amino acid composition, B-group vitamins, sugars, protein and starch digestibilities, and decrease in phytates and protease inhibitors are the metabolic effects of the sprouting process.

2. Phytic acid is present in the bran of all grains and the hulls of seeds. Phytic acid inhibits absorption of minerals - especially calcium, copper, iron, magnesium and zinc - in the body. According to Wikipedia:

In-home food preparation techniques can reduce the phytic acid in all of these foods ... effective methods are soaking in an acid medium, lactic acid fermentation, and sprouting.

Proper preparation of grains neutralizes the phytic acid and makes the grain more easily digested plus increases its nutritional value!

Why then, don't we take the time to properly prepare our grains, seeds and legumes? For many of us, it is lack of knowledge.

Did I soak my flour? No.

Why? Because I had never heard of phytic acid. I had never heard about the nutritional value of the grain increasing so dramatically when sprouted. This may explain my "moderately-severe" osteoporosis diagnosis at age 48, before menopause!

If it is so important, we should all know how to do it! If you do not have the time to sprout and soak your own grains, you can also purchase them (from my affiliate -where to buy sprouted flour)!

There are 2 methods of grain preparation and both involve soaking in water:

The basic method is the same for all grains, seeds, and legumes:

While sprouted grain is available to purchase at many health food stores and online, it is more economical to purchase the grains in bulk, sprout, dehydrate and mill yourself. It is safe freeze the flour once it is milled.

The basic method is the same for all whole grain flours:

Soaking the flour may change the texture of baked goods. An example is Whole Wheat Pancakes/Waffles – soaked flour makes much lighter waffles. This is also a good alternative when you do not have access to a dehydrator.

Both methods, sprouting and soaking, accomplish the intended purpose of neutralizing the phytic acid in the grain. Which ever method you choose or if you choose a combination of the two, the result will be a food which provides more nutrition to yourself and your family without the danger of contributing to mineral deficiencies in those you love.