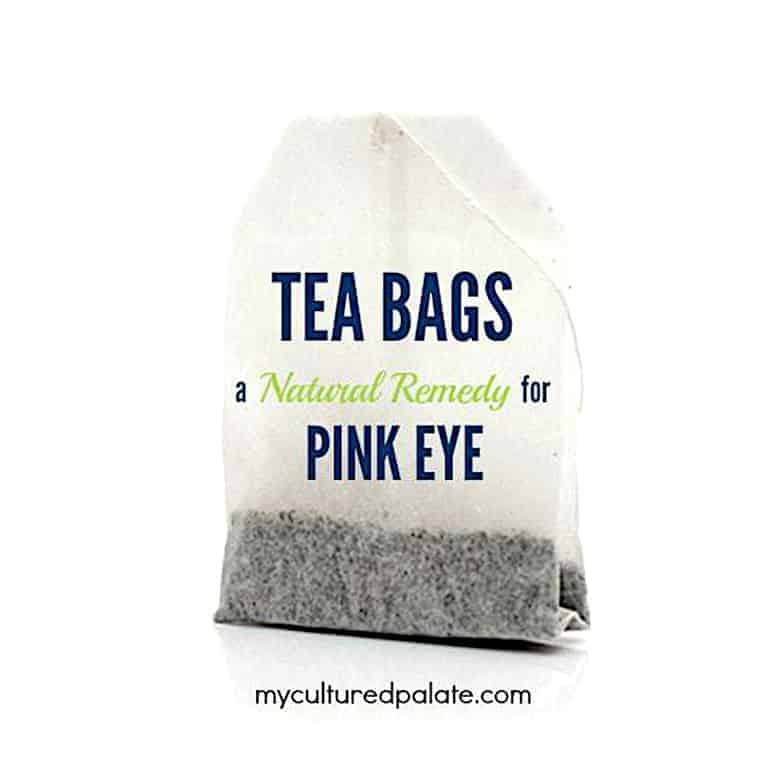 In Tea Bags - A Natural Remedy for Pink Eye, I will teach you another of the natural remedies that really work. And, not only work, but work quickly!

What do you do when your child wakes up with a red crusty eye (sometimes crusted shut) that is scratchy feeling, swollen and watery? Is there a natural remedy for pink eye?

Or worse, your child wakes up with two, red crusty eyes that are scratchy feeling, swollen and watery?

Before I tell you what I do, let's diagnose the problem.

I am sure most of you know from the symptoms, that it is probably pink eye or conjunctivitis. Not only is conjunctivitis uncomfortable but it is also extremely contagious. It can be a nightmare for a mother!

Conjunctivitis is an inflammation of the outermost layer of the eye and the inner surface of the eyelids - also known as the conjunctiva. There are 3 types of pink eye:

1. Viral - Pink eye that is viral normally affects one eye and then a few days later the second eye becomes affected. The discharge with viral pink eye is usually watery.

2. Bacterial - Pink eye caused by a bacterial infection will affect both eyes at the same time and the discharge is usually yellow-green and thicker.

3. Allergy - Pink eye may also be caused by an allergic reaction.

Since pink eye is so contagious, good hand washing should be practiced, avoid sharing towels and avoid touching the eyes with your hand (which is especially difficult for children)!

What do I do when someone wakes up with pink eye?

When our oldest son was very young, he had pink eye. Being the concerned mother, I took him to the doctor who prescribed an eye ointment.

Later, while relaying to a sister-in-law how difficult the ointment was to apply, she asked if I had tried teabags.

Being skeptical, I dismissed the natural remedy until our next bout with pink eye.

With the next outbreak, not wanting to apply the ointment again,  I gave the natural remedy a try.

I am happy to report that I have not been to the doctor because of pink eye since - that was 26 years ago!

I reach for black tea teabags now! The earlier the treatment is started the quicker the results are seen. Black tea also contains caffeine, which makes it helpful for combating undereye circles.

When you're not using black tea for pink eye, it has many health benefits. Here are just a few from The Spruce:

The many antioxidants and polyphenols in black tea are associated with a number of health benefits.

Interestingly, these two flavonoids are more concentrated in black tea than in green tea.

Additionally, black tea is low in sodium and calories (if you don't add a sweetener!). lus, black tea has a bold flavor, making it a good substitute for those accustomed to soft drinks other unhealthy beverages (which also tend to have bold flavors).

As I mentioned, black tea is abundant in antioxidants, such as flavonoids. These antioxidants have been demonstrated to lower the risk of heart disease. They do this by preventing the oxidation of LDL cholesterol and preventing damage in both the bloodstream and at artery walls. Additionally, black tea flavonoids are able to both improve coronary vasodilation and reduce clots, and its manganese may reduce the risk of coronary heart disease by helping cardiac muscle function.

Studies have shown that as few as three cups of tea per day can improve heart health.​

Perhaps the most-studied tea health benefit is its anti-cancer benefit. While most of the study has been on green tea, there is a growing body of evidence that black tea also plays a role in cancer prevention.

Black tea is also remarkably tasty. I find that it pairs well with natural sweeteners, lemon, and even fruits and citrus. I know a lot of people don't like green tea because it tastes a little too tea-ish. Black tea is a great choice if you're picky about tea!

A Natural Remedy for Pink Eye

1. Make a cup of tea using a teabag with black tea in it. To find organic tea from my affiliate partner, click here.

2. Allow the teabag to steep a few minutes in the hot water.

3. Remove the teabag from the cup of water but do not squeeze.

5. Place the teabag on the affected eye and leave for at least 5 min. - I have the child lie down on the sofa with eyes closed and a hand-towel draped around their neck and face so the excess tea does not drip on their clothes or the sofa. If the child tolerates this well, I let them lie with the teabag on the eye (or eyes) for as long as possible - usually 15 - 20 min. Periodically, I will gently squeeze the teabag so the tea puddles on the closed eyelid. It is fine to let the tea get into the eye and it will actually aid in the healing.

6. Repeat 3 - 4 times per day until the eye clears up - usually within 1 day there is remarkable improvement.

The tea helps to clean the goop out of the eyes and also soothes the swelling and irritation by drawing out the infection.

Disclaimer: I am not a doctor and I do not pretend to give medical advice but I do want to share what works for me - I hope it helps you.